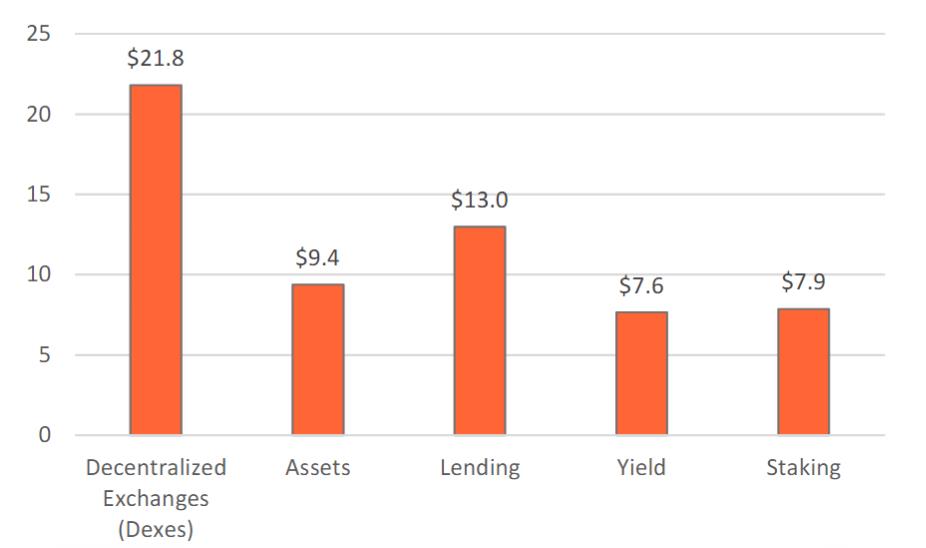 We turned bullish on Ethereum 6wks ago, now turning cautious.

Here are 10 reasons why:

A dovish Fed meeting was assured once the possibility of a +100bps rate hike was floated around, making the actual +75bps a ‘dovish hike – now standing at 2.25-2.50% for the Fed Funds target rate.

There is now an 80% probability priced in that the Fed Funds rate will stop at a maximum of 3.25-3.50% - a sign that the next rate hikes will be potentially less than the last +75bps and will come in smaller increments. Therefore, the marginal rate of change is lower, and the supposedly forward-looking financial markets are eyeing the end of the rate hiking cycle which is forecasted by end of 2022 already.

This is quite possible in our view, and we have voiced this since mid-June based on our analysis around the projection of the inflation rate (see ‘Cryptoverse’ from June 13 ’22). Interestingly, the 5-year, 5-year (5y5y) forward inflation expectations rate, an indicator for where inflation will be in 5-years’ time, has dropped back from a short-term +2.70% spike in May ’22 to now back to 2.08 / 2.33%.

Accurately projecting inflation data has proven to be an important risk-asset market timing indicator for both stocks as well as crypto and was a key consideration for our constructive view since mid-June. The current reading is a strong signal that the macro headwinds for crypto are subsiding, as we projected in late June already. Indeed, the crypto market has started to focus more on idiosyncratic events (such as the Ethereum Merge) again. 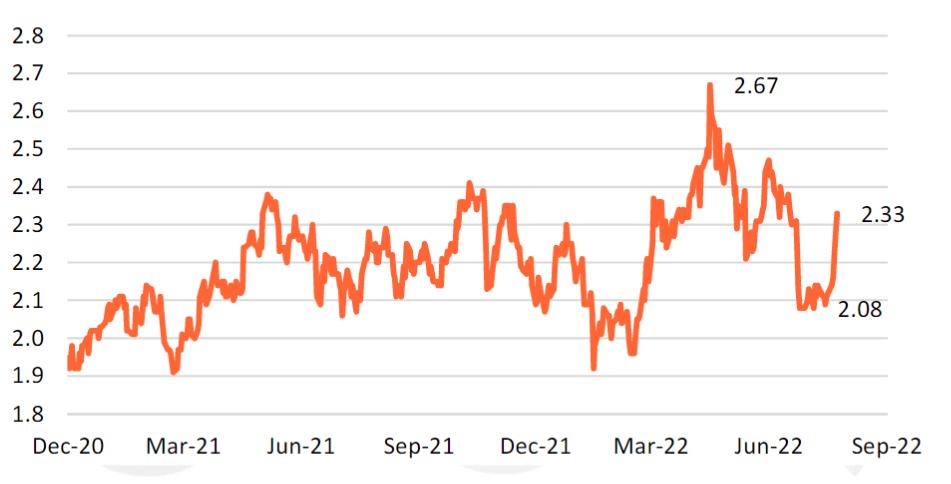 There appears to be still some overhang from Bitcoin miners to liquidate inventory (sell Bitcoin). Despite the rally during the last few weeks, we have seen muted futures liquidations combined with record trading volumes for Bitcoin – especially relative to other cryptocurrencies.

Bitcoin has averaged $50-60bn daily trading volumes (vs. $20-30bn normally) while volumes on Ethereum have largely remained in their well-defined ranges $10-15bn.

Another explanation for the extreme Bitcoin volumes could be that macro funds have been taking directional positions and while CME Futures volumes have increased considerably into last Friday’s futures and options expiry, open interest has remained largely stable. Hence, we tend to favor the theory that miners have been the sellers and caused the two-way market.

Indeed, the Bitcoin Network Hashrate has struggled again, a sign that less machines are able to stomach the prices (electricity & Bitcoin). So, miners might have felt some relief and so have their stock prices. For example, shares of Bitcoin miner ‘Core Scientific’ ($820m market cap) have rallied +66% during the last month (vs. Bitcoin +20%).

During the June 20 ‘Cryptoverse Weekly’ report we made a ‘compelling investment case for Bitcoin Mining’ and pointed out the investment return ‘Convexity of Bitcoin mining at 20k BTC’.

Futures liquidations have averaged $300m on ‘rally days’ in July which is a fraction of the $500m to $700m days we saw during the previous two peaks in liquidations in 2022.

Dynamic NFTs have begun to enter the market and challenge the way people think about NFTs, giving the NFT space an extra surge of excitement. 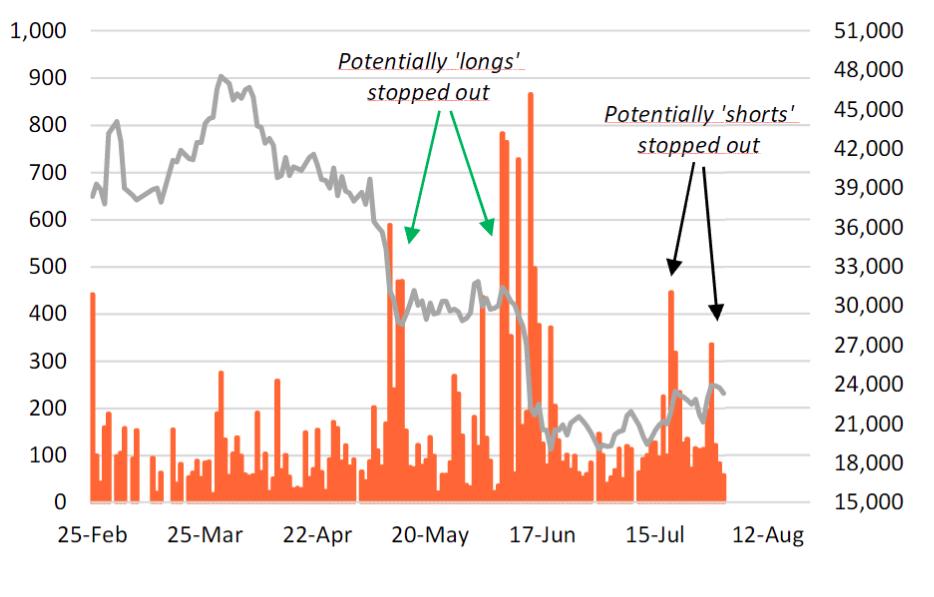 State of the Crypto Market

Mt.Gox was one of the world’s largest cryptocurrency exchanges that operated from 2010 until it declared bankruptcy after a major hack (February 28, 2014). At its peak, Mt.Gox was responsible for about 70% of the total bitcoin trading volume at the time.

The 2014 hack resulted in 850,000 bitcoins to be stolen – valued at $500 million at the time and worth $17.8 billion today – with only 200,000 BTC since recovered. Hackers used a compromised Mt.Gox admin account and crashed the Bitcoin price on the site, only to buy Bitcoin at those low artificial prices.

Mysteriously, an account believed to be associated with a different 80,000 Bitcoins hack from March 2011 (now valued at $1.7 billion) from the Mt.Gox hack has not seen any coins being moved yet.

Mt.Gox is to now pay out to its creditors 141,686 BTC (worth about $2.8 billion USD) as part of a civil rehabilitation plan that was approved in Nov 2021. The voting process required that 50% of votes must be in favour and represent 50% of the claim value for the plan to be accepted.

Since all 850,000 BTC could not be recovered, only a fraction of the original amount held by creditors will be compensated. The plan outlines two options for creditors to receive their payout: they can either opt for an early partial lump sum payment (fixed early payout rate of 21%) or they can wait for a final payment (estimated rate minimum of 6% and maximum of 23.6%) at the end of the civil rehabilitation period in hopes for possible greater recovery of funds.

Creditors also have the option of receiving their payout in BTC, BCH, fiat currency (USD, Euro or Yen) or as a mixed combination. There are also investment and private equity firms such as Fortress Investment Group who have bought up creditor claims by offering creditors an earlier low-risk payout option at a lower payout rate.

At the moment, there is no set date for the payments with the only official update stating that the trustee is making preparations for the repayments, however it is speculated that payouts will commence as early as Aug onwards.

There is rising concern that the release of the bitcoin as per the rehabilitation plan will cause a sharp drop in the price of bitcoin as a result of mass liquidation. Even if creditors choose to receive the payout in fiat currency, the trustee may first sell off an equivalent amount of bitcoin which could flood the market, though the specific details have not been disclosed.

There have also already been recent downward pressures on price from the Luna Foundation Guard (liquidated 80,000 BTC upon Luna crash) and Three Arrows Capital. However, not all creditors are likely to sell their bitcoins immediately. These creditors have been in the crypto market since 2014, so they could opt to delay their payout until the end of rehabilitation period which may yield a rate higher than 21%.

Investment firms who acquired creditor claims may choose to payout in fiat currency, in which case these bitcoins may likely be sold over the counter and thus will not affect trading volume in the exchanges.

Furthermore, although the payout dates are still unknown, they will unlikely occur all at once or at least be delayed until the market recovers given that the plan states that the trustee may set a Restriction Reference Period where the creditor would be prohibited to move the received payout from their wallet - this would help minimise large price movement in bitcoin even in the worst-case scenario where all creditors decide to sell.

As of now, it may be too hasty to say that the price of bitcoin will dramatically drop until further information regarding the payout logistics and timing is released.